If a quantum dot (or atom) emits a photon, before the photon is detected, the system is naturally in a quantum superposition between “emitted” (got a photon) and “not-yet-emitted” (no photon). Based on this mechanism, researchers from the Paris QLUSTER team with support from FORTH have firstly achieved to generate and characterize photon-number entanglement by sequential excitation of a quantum dot in an optical microcavity; further they show that this idea is suitable for generation of a diverse class of novel quantum states of light. 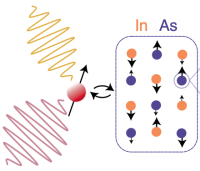 In QLUSTER, mostly InGaAs quantum dots are used to generate high-quality single and entangled photons. In this system, a variety of high-spin nuclei exist, this often limits the coherence of electron spins if they are not well under control (see previous results below). Now here, in a new study of the CAM QLUSTER team, the electron spin is used to witness non-classical correlations in the nuclear spin bath, potentially opening the doors to study strongly correlated many-body quantum physics in this system, or to develop novel quantum memories.

Detection of a single quantum magnon in a quantum dot (2021) 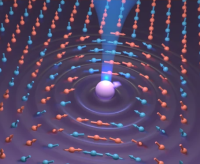 “A quantum dot has been used to detect a single excitation among the tens of thousands of atomic nuclear spins comprising it. This result is an important step towards treating nuclear spins as a quantum memory rather than a troublesome source of noise.”. This is a quotation of the Nature Physics News & Views article by the QLUSTER team Paul Hilaire and Sophia Economou (FORTH) on the latest experimental results from the QLUSTER team in Cambridge (CAM)!

Coherent optical states consist of a large quantum superposition of different photon number (Fock) states, but because they do not form an orthogonal basis, no photon number states can be obtained from it by linear optics. Here we demonstrate firstly the reverse, we produce coherent light from single photons! We manipulate single photons using quantum interference in an optical Sagnac loop and show that quantum states of light can be obtained with tunable photon statistics, including approximately coherent states (see figure). These artificial quantum states of light are (before detection) more interesting than coherent light and contain quantum entanglement of photons at different times, similar to linear cluster states as achieved by HUJI & CNRS recently.

A bright and fast source of coherent single photons (2021) 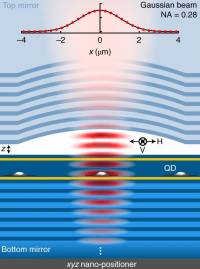 Natasha Tomm, Alisa Javadi and coauthors from the QLUSTER research group at Basel led by Richard Warburton report a single-photon source with a very high end-to-end efficiency. The device is based on a self-assembled gated quantum dot in an open, tunable microcavity. High material quality and an optimized device structure ensures low noise of the quantum dot, and the optical cavity mode is well matched to a single-mode fibre collecting the single photons. They demonstrate production of single photons on-demand with a probability of up to 57% with very high purity and indistinguishability. Coherence persists in trains of thousands of photons with single-photon creation at a repetition rate of 1 GHz.

Sarah Thomas and Pascale Senellart from the QLUSTER research group at Paris have written a Nature Nanotechnology news & views article about the single photon source: The race for the ideal single-photon source is on 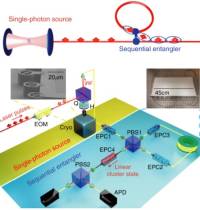 QLUSTER research groups led by Hagai Eisenberg and Pascale Senellart have achieved the generation of a 4-photon cluster state! Single photons were generated in a highly efficient quantum dot - cavity device and subsequently entangled in a compact fiber-loop setup. The entanglement is encoded in the polarization degree of freedom, and all photons are in a common spatial mode. The reported architecture can be programmed for linear-cluster states of any number of photons, that are required for photonic one-way quantum computing schemes. 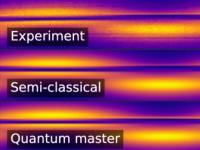 Most cavity-based single photon sources operate in the weak coupling regime of cavity QED, and due to material birefringence and fabrication imperfections the optical cavity modes are usually polarization-split. In this paper physicists from Leiden have developed a simple analytic semi-classical model that allows accurate prediction of the response from polarized quantum dot (or atom) transitions in a birefringent cavity, and demonstrate improvement of a single photon source based on it.

Generation of non-classical light in a photon-number superposition (2019) 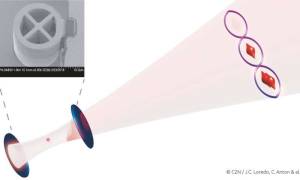 Physicists at C2N have demonstrated for the first time the direct generation of light in a state that is simultaneously a single photon, two photons, and no photon at all. They showed that the same kind of light emitter used for decades is also able to generate these quantum states, and expect that this holds true for any kind of atomic system.

A gated quantum dot strongly coupled to an optical microcavity (2019) 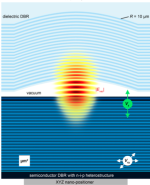 The strong-coupling regime of cavity quantum electrodynamics (QED) represents the light–matter interaction at the fully quantum level, for instance, a single photon shifts the resonance frequencies significantly. However, miniaturizing semiconductor cavities without introducing charge noise and scattering losses remained a challenge. Here we present a gated, ultralow-loss, frequency-tunable quantum-dot microcavity device in the strong coupling limit overcoming all of the mentioned shortcomings.

Quantum interface of an electron and a nuclear ensemble (2019)

Semiconductor quantum dots offer the highest rate and quality of single photons among all other solid-state quantum light sources. However, they lack access to a long-lived quantum memory, such as a proximal nuclear spin, that would make them competitive for large-scale quantum architectures. Gangloff et al. used the spin of a single electron and light to cool an ensemble of about 30,000 nuclei within semiconductor quantum dots. They then extended this approach to manipulate individual nuclear spins. The ability to manipulate the ensemble of nuclei coherently, down to the single nuclear spin, could lead to the realization of a quantum dot network where each node has its own dedicated quantum memory.